5 Simple Rules for Filming My Superman 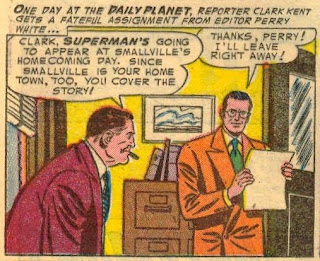 They did it. They finally did it. Damn them all to hell, they did it.
They cast the role of Superman in the Zack Snyder take on the Man of Steel that will be filming in Vancouver this summer. I dunno, some British guy. But I guess that means that they're actually going to go ahead and make a Superman movie for the 2010s.
Okay, look, I thought Snyder's Watchmen was a joylessly pedantic adaptation that mostly missed the point of the Alan Moore/Dave Gibbons series. Patrick Wilson was pretty good as sadsack superhero Dan Dreiberg, but then I'm a sucker for sadsack superheroes. I do respect Snyder's high regard for art direction, but come on, dude, even Tim Burton always ties his eye-candy to his movies' themes.
Snyder will be at a disadvantage here, compared to his previous comic book adaptations. Both The 300 and Watchmen were based on graphic novels (in Watchmen's case, it was a 12-issue series that was subsequently collected in the graphic novel format) that Snyder clearly used as storyboards for his film. But there is no Superman graphic novel. Oh sure, there are graphic novels that tell stories about Superman, but what's the greatest Superman story? What's Superman's Dark Knight Returns or Year One (both of which have been pilfered by Chris Nolan for his Batman movies). Where's Superman's "Death of Gwen Stacy"? Which story, in Superman's nearly 75-year history stands out as the perfect distillation of Superman's essence? There are certainly some popular favourites, "Whatever Happened to the Man of Tomorrow?" and the unimaginatively-titled "All Star Superman" come to mind. But it's unlikely either will be directly adapted for Snyder's talkie.
For one, so soon after Superman Returns, I don't think anyone is eager to have the word whatever in close proximity to the character. Second, "Whatever/Tomorrow" is a Supermanic Götterdämmerung, a Last Days of Chez Supes, that imagines an ending to Superman's story. That's no good for a big budget sequel machine. Third, who wants another round of Alan Moore whinging about what's been done with stories he wrote a generation ago?
All Star Superman, in its full glory, could be adapted as a trilogy of films. There's certainly enough story there. But that's not going to happen, since an animated adaptation will be coming straight-to-DVD (or whatever format things go straight to these days) sometime this year. 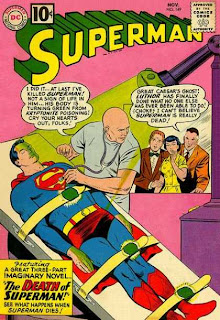 Interestingly, All Star Superman also concerns the final adventure of the Man of Steel. Most superhero mythos find their most iconic stories in characters' Secret Origins. But a great part of Superman's appeal is his endurance, his reliability, the longevity of his exploits. Superman was not only around for my childhood, and my parents' childhood, but also my grandparents' childhood--or at least their early adolescence. Of course, my daughter is already a Superman nut. And so it goes. We take Superman for granted, and it's generally good that we do. That's the kind of character he is. When writers seek to affect poignancy within a Superman story, it's more often than not his demise that drives home his significance. Ever since 1961--in a story written by Superman's creator, Jerry Siegel, no less--DC Comics has been wringing pathos and bathos out of sending off to arm-wrestle Great Caesar's Ghost. Like Lex Luthor says, "cry your hearts out, folks!"
But Zack Snyder probably won't kill Superman. Not in the first movie, at least. I get it, and mostly, I support it. Here are five things I would like Snyder to keep in mind as he constructs a new Superman film:


mp3: "Laughing With You" by Marcellus Hall

Bulldozered by Emmet Matheson around 9:49 pm

Email ThisBlogThis!Share to TwitterShare to FacebookShare to Pinterest
Labels: movies, stuff to do in Vancouver, superman, supermanifesto

Jesse and I have already to decided to cast Anne Hathaway as the next Lois Lane. Give it some time to sink in, I think you'll like it.

I like the article and the ideas, but, sadly, it looks like they've just cast a homosexual Superman. I swear I am not kidding you. It appears Warner Brothers is more interested in having Superman tank as a franchise for the insurance money than in supporting the character to make it a success. It's really depressing and disturbing, really. Too bad. So sad. 8(

Anne Hathaway is a great idea. She's admirably held her own alongside Steve Carell (in Get Smart) and Meryl Streep.

Bring on the euros! Audrey Tatau. Eva Green. She's American, but is Kat Dennings old enough? She can do smart AND funny.