the darkness of your song

This one, Natural Weather, I listen to when I'm into feeling something real, something elusive, something only music does.  "Where are you now?" Michael Feuerstack is a horse, eating apples from the hand. At first, you think it's a metaphor, but no, it's a horse. Feuerstack becomes the horse, and the horse longs for you. Sweep the stable, bring an apple.
Could you write a song from the POV of a horse, could you write an unbelievably tender & intimate song from the POV of a horse?

The instrumentation is so lush but so simple, mostly just Feuerstack. Intimate with himself. One of the Arcade Fire does some percussion. You don't have to be alone.

Bulldozered by Emmet Matheson around 11:52 pm No comments:

A Permanent Figure of Jacked-Up Sorrow: a rambling survey of idiosyncratic 70s detective novels, part one


NOTHING TO SEE HERE

(removed blog post for further tinkering, thanks for reading!)
Bulldozered by Emmet Matheson around 6:57 pm No comments:

Email ThisBlogThis!Share to TwitterShare to FacebookShare to Pinterest
Labels: i read books, It helps if you dress like a detective, Jack Kirby, jerome charyn, Ross Macdonald

a lot of crank air

Bulldozered by Emmet Matheson around 2:10 pm No comments:

Email ThisBlogThis!Share to TwitterShare to FacebookShare to Pinterest
Labels: saddle in the rain

IF I RECALL CORRECTLY: In the 1982 film Shoot the Moon, novelist Albert Finney goes through a divorce from Diane Keaton. Keaton keeps the family's rural home, with the couple's three four daughters (among them, future sitcom superstars Tina Yothers and Tracey Gold), where they are building a tennis court. The contractor building the tennis court is played by affable Peter Weller and it's not hard to figure out that there's chemistry between Annie Hall and Robocop.
Finney and Keaton's separation has its trials, but we generally see things work out and both characters reach a place in their lives where they've got some peace with the end of their marriage. This is evident in the final scene, where Peter Weller has finished the tennis court and the family throws a big party to celebrate and Albert Finney shows up and wishes them well and gets back in his car and drives off back to the city where his new life awaits.
EXCEPT HE DOESN'T.
He gets in his car all right, but then Bob Seger's "Still the Same" comes on and Albert Finney smashes up the tennis court in his wood-paneled station wagon. ROLL CREDITS.

That's kind of how I feel about this year. My station wagon doesn't have wood paneling, and I don't have a Bob Seger cassette for the tape deck, and you can't smash up a year with your car, but 2014 is a goddamn tennis court that needs to get smashed up. Even though I know, just like Albert Finney knew, that smashing it up won't get me back all I've lost. But goddamn if it won't make me feel good for a minute or two. 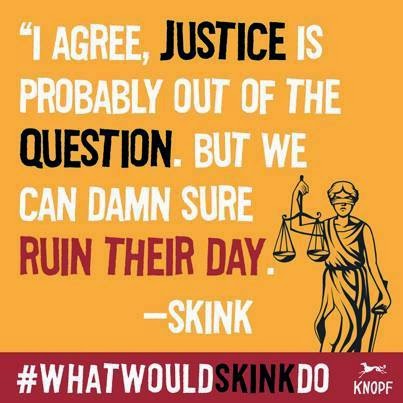 I wrote a lot in 2013. Not so much in 2014. I guess I wrote a lot of record reviews, though. I don't know if that counts. I read a lot. That's for sure. And I made a point of reading outside my habits, for which I was always rewarded. My three favourite books (that I read in 2014, only one of them actually came out this year) shared some common themes: boats, sisters, survival. All three of them totally ripped my guts out.
Claire Cameron's The Bear, Madeleine Thien's Dogs at the Perimeter, and Eden Robinson's Monkey Beach. I openly wept while reading each one. I did not read better books than these this year. And I read a lot of books. I read Inherent Vice. Which, yes, is very good and I'm looking forward to seeing the movie some day, but SUBJECTIVELY (which is all I got here, folks) it's pretty much the same as the book I've been writing and that, by turns, bummed me out and encouraged my efforts. Except my book is set in present day Vancouver and the drugs are different and lots of other things are different, too, but Pynchon obviously liked a lot of the same novels and TV shows that I did and what are you going to do?
Another book that's similar to the book I've been working on is Sam Wiebe's excellent debut Last of the Independents. It's a fairly straightforward update of the PI form set in today's Vancouver and does a lot of things well, especially with regards to its setting. Like with Inherent Vice, it was a little frustrating to see someone doing things I was trying to do, even more so because Wiebe did them so well. But it was also liberating, because hey, I don't have to convince anyone that Vancouver Noir is a real thing. I don't have to show a lot of world-building. I can stand on Wiebe's shoulders and do cannonballs into False Creek (which I don't advise).


So what I'm saying is, if you like Inherent Vice and you like Last of the Independents, I think you'll find something worthwhile in my book. If you don't like anything, you might like it. I don't know. I did the huge bulk of the work on it in the last part of 2013 and I've just been kind of tinkering with it all year. Rewriting isolated sections. I spent three months working on one scene. I'm going to go in and do a total rewrite early in 2015 and then, if I still like it, I'll let some people see it. I've got other things I'd like to write. I've got a notebook of stuff I want to do after I finish this thing. Comedy. Journalism. Essays. I wrote two really good pieces for Bunch Family this year. Got to work with a great editor. I'd like to do more of that. I've got a few ideas for TV shows I wouldn't mind making a few million off of. I could even write scripts for hire.

I want to do SFU's The Writer's Studio program. But I don't think 2015 is going to be the year for all that. I've got other responsibilities, I've got other obligations.  2015, as far as writing is concerned, is going to be another year where anything I can push out in the few moments I can find will count as successess and I'm not going to spend any energy feeling bad about that.
I'm going to read more poetry, clear out some of these detective novels sitting on my shelves, fill more notebooks full of idiot ramblings, take more pictures of hot dog boxes and try to visit the Storm Crow Tavern a few more times.

Thanks to @emmetmatheson for perpetrating this Bob Seger song upon the ears of @stormcrowtavern patrons: https://t.co/khEwsjPmoC #terrible
— Sean Cranbury (@seancranbury) December 29, 2014

Bulldozered by Emmet Matheson around 12:48 am No comments:

Email ThisBlogThis!Share to TwitterShare to FacebookShare to Pinterest
Labels: 2014, 2015

Just found Casey N. Cep's COUNTRY TIME column on Charley Pride and was reminded of what a joy it was to interview him several times during my years in Regina. Here's a preview I wrote for the Leader-Post in advance of his September 2004 concert in Regina.


Still haven’t decided whether or not to go see country music legend Charley Pride? Here’s a last-minute sales pitch straight from the horse’s
mouth.
“It’s the best show on the road today,” Pride said last month from his Dallas, Tex. home. “No brags, just facts. It’s the best show on the road bar none. Lots of familiar tunes, some of the new ones, it’s a guaranteed deal.”
Originally scheduled for last May, Pride’s Canadian tour had to be postponed after he was diagnosed with a subdural hematoma.
“It’s where the blood for some reason collects down at the bottom of the brain and pushes the brain against the skull,” Pride explained matter-of-factly.
“They had to drill a couple of holes in each side, get some tubes in there, and get it out. So they did that May the 8th and I went back a couple of days ago and
did a full MRI  and they said I’m completely healed. They don’t know, and I don’t either, what caused it, but I’m okay, as of this moment.”
Even before he went under the knife, Pride was certain of a full recovery. He and his booking agent didn’t hesitate to reschedule all the dates on his first Canadian tour in over a decade.
“You got ten provinces up there, and I’m really behind on all of them,” Pride said, adding that commitments to a theatre with his name on it in Branson,  Missouri kept him from touring as much as he’d like during the 90s.
“You become a victim of your own doing,” he said. “Everyone suffered, only Canada suffered the worst. England wants us, Australia wants us, we just got back
from Norway, and now y’all in Canada wants us. I’m needed in all these places, yet I’m getting old.”
One concession 66-year-old Pride has made--or rather is trying to make--to age is to trim his annual concert schedule from 117 shows to 45.
“Saying we gonna cut down is easy doin’, but doin’ it ain’t that easy! Ireland would have us every other week,” Pride said.
The Mississippi-born Country Music Hall of Famer has no plans to retire, although he wouldn’t mind having a few more free days to play golf. He points to the comedians like Bob Hope and George Burns, who kept performing into their 90s.
“Those kinds of people, they don’t retire,” Pride said. “They just die. Why did Bob Hope keep going out? Well, he loved them laughs. I love hearing that
applause and feeling that warmth from from an audience.”
Audiences seem to love seeing and hearing Charley Pride. A few short weeks after his surgery, he made an appearance at the venerable Grand Ole Opry, of which he’s been a member since 1993. He received two standing ovations.
“They stood up before I even did anything and then they did it again after I was through,” he said. “As a matter of fact, some of my fans think I’m singing
better now than I ever did.”

You all seemed to like yesterday's gag a bunch, so here's another Brad Meltzer-written comic remixed with text from Richard Meltzer. From Brad, 2004's Identity Crisis. From Richard, 1972's Gulcher: Post-Rock Cultural Pluralism in America (1649-1993). ENJOY! 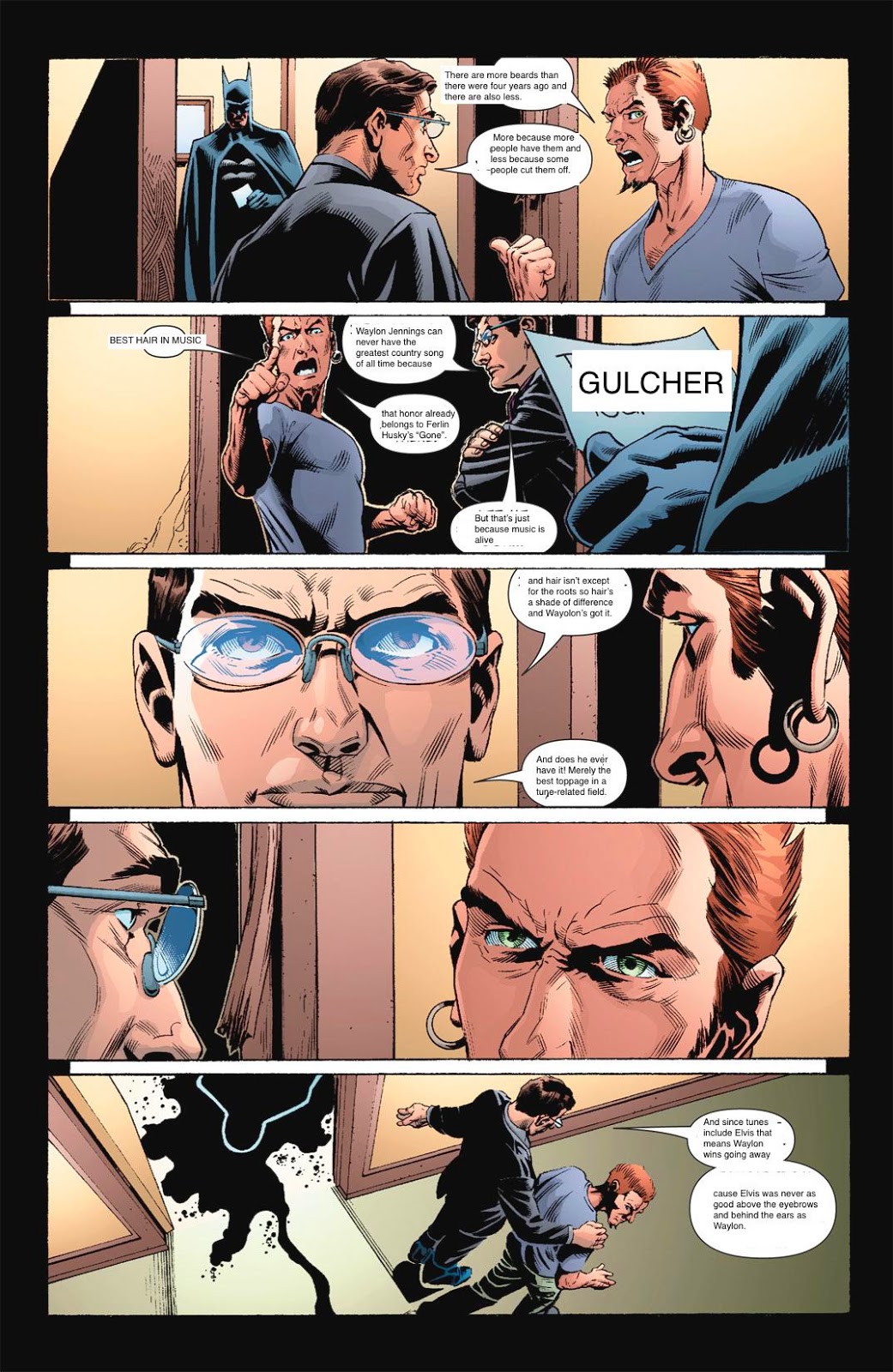 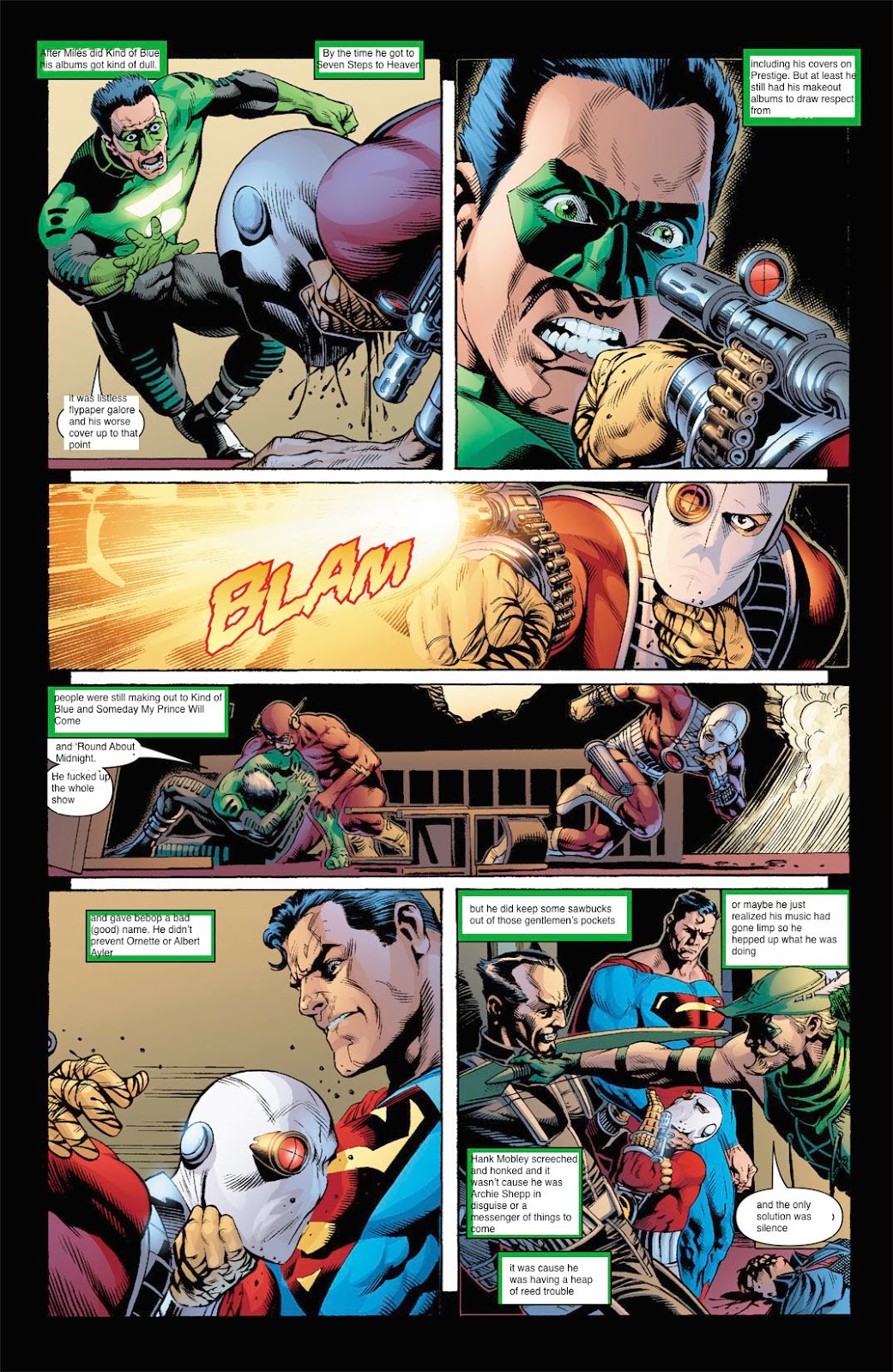 Bulldozered by Emmet Matheson around 1:53 pm No comments:

For some reason, noted thriller writer Brad Meltzer recently rewrote the very first Batman story, and then Chip Kidd remixed that into the original "Bob Kane" artwork.
Clearly, though, DC picked the wrong Meltzer.
Here, then, are two excerpts from my remix of Batman's first adventure, "The Case of the Chemical Syndicate" using text from Richard Meltzer's Holes: A Book Not Entirely About Golf. 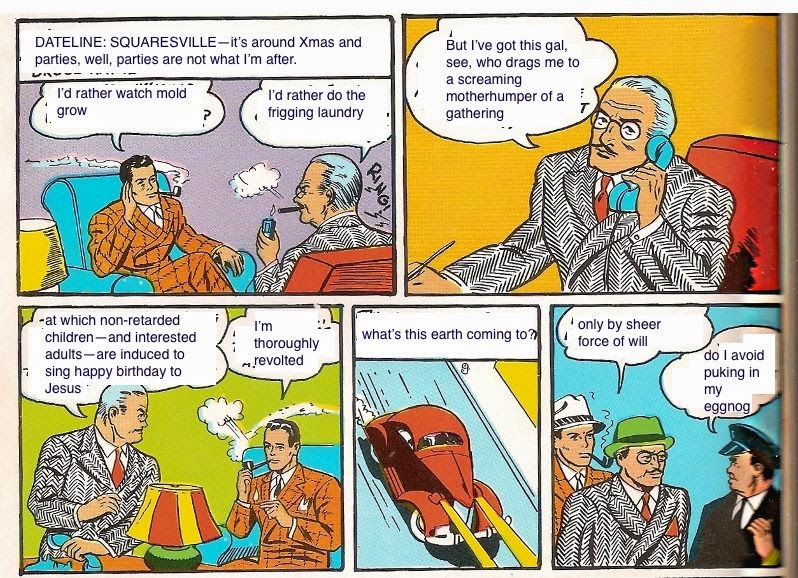 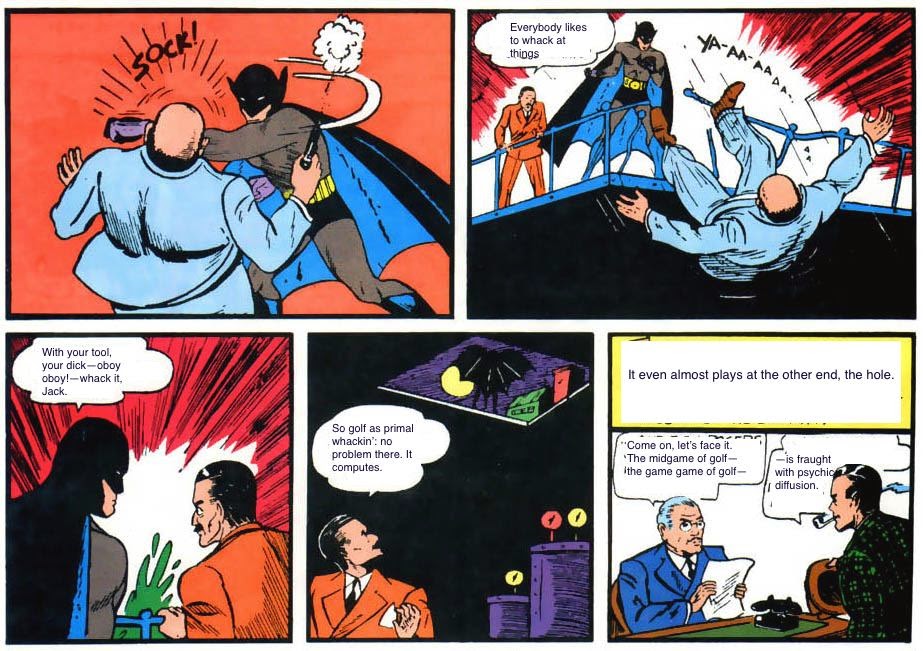 Bulldozered by Emmet Matheson around 2:47 pm No comments: